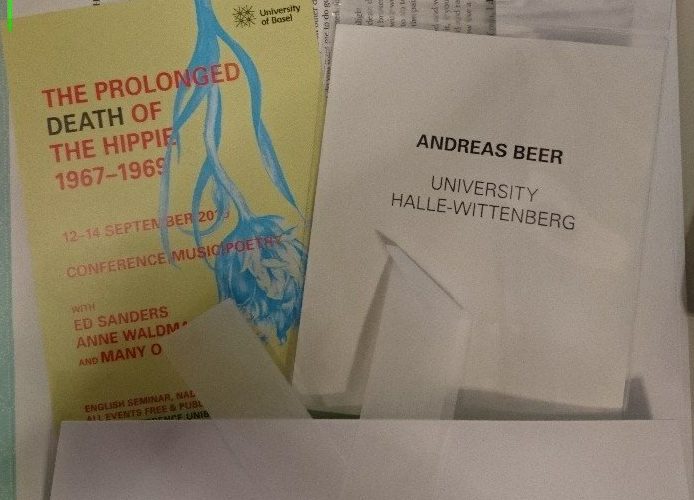 As seems to become customary towards the end of the year, I am revising my blog activity (eight entries: good, solid performance, I’d say) and catching up with that one activity that always seems to go missing in my due reporting over the course of the year.

This time it is a conference which indeed would be shameful to not report on: “The Prolonged Death of the Hippie, 1967-69” at the University Basel (Switzerland), 12-14 September, 2019. Apart from the academic discussions, this was one of the best conferences I had the pleasure to attend thanks to its well-curated cultural programme. Not only did the city of Basel show off its best (extremely nice weather with possiblities of bathing in the Rhine) and the conference was small enough to really talk to and focus on all attendees, but the organisers also invited several people that had been active in the 1960s countercultural movement (how I prefer to call ‘the hippies’) and offered readings of poems and loads of anecdotes. Anne Waldman and Ed Sanders live on stage, so to say. It really showed that the organisers were personally interested in mixing first-hand experiences with reflections and analyses on those years (at least from the US; other regions were only marginally present, I noticed).The special spirit of the conference was exemplified by the inclusion of some cigarette papers in the conference folder (see above); unfortunately without any contents.

The conference, hosted by the English Department, investigated how the “historical period” of the hippies — the second half of the 1960s, which makes it a rather short period — came to a sudden halt with the assassination of Martin Luther King, the murders of the Manson sect and other violent turns. Yet, this was not a death-on-arrival, the organisers argued, but rather a prolonged decay, which lasted well into the 1970s.

My own contribution to that conference was a talk on Robert M. Pirsig’s classic novel Zen and the Art of Motorcycle Maintenance (1974) and the transformation of one countercultural value, namely quality (of/in life), into a form that helped prolong its use in the 1970s, transform it into a commodity in the 1980s and make it appear in debates about higher education in the last twenty years.

This last aspect obviously germinated from my current work and was (I presume) the unique selling point of my presentation: bringing together the metaphysical discussions on quality with the (sometimes harsh) realities of changes in higher education. With a hopefully ironic undercurrent, my talk centred not simply on the obvious idea that “quality” as a buzzword disguises changes that occur with rather non-quality-centred issues in tow, but showed that Pirsig’s focus on processes and mindful practices (ie. the Zen of not defining your values, but rather impersonating them via your actions) might also offer an exit from the current conundrum of quality-talk. And that universities and colleges are actually in a position to use this twist in their favour.

If that sounds incomprehensible but interesting, I hope I will get the chance to publish this talk as an article in a journal and thus elaborate on it. Right now, I’m actively engaged in the writing of that article and am debating whether to try and publish it in a journal on higher education, or stick to my guns and attempt to put it into a journal on cultural studies.

The new year seems to bring choices over choices…