I guess it’s already the term of the year 2017: fake news. A word mostly used inaccurately, and which tends to blur distinctions between wrong facts distributed in the news, referencing errors in studies or on social media platforms, plain old propaganda, and sometimes even opinion pieces. Often, it simply serves to say: “I don’t want to believe it” or “I think you’re wrong,” but leaves open if the inaccuracy (if committed) was intentional, even strategic, or a mishap due to reasons like time constraints, misunderstandings, etc.

All that being said, it nevertheless is important to follow “fake news” not for the term’s sake, but rather for the reverberations this has throughout the attentive (or not so attentive) public. How do people react to and what do they do with “fake news,” that seems to be the important ground for analysis for me.

Let’s take an example from the honorable JFK-Institute at the Free University in Berlin, my employer at the time: When contracting me, someone set up a profile page on the institute’s website, and slapped the title “Prof.” in front of my name. Generous, but wrong. Basically fake news. Although being flattered, I reported that error, but so far it remains there for anybody to be seen.

And just a few days ago, a message arrived from a friend congratulating me on my new job and position! Well, I haven’t had the chance to ask how she found out, but it must have involved the webpage as only there the erroneous title appears.

It motivated her to drop me some lines, I replied, and thus this particular piece of fake news helped to re-establish contact with an old acquaintance. Plus, it yielded a screenshot (see below) which I probably won’t see again for a long time. 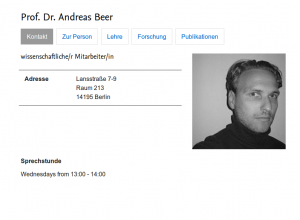