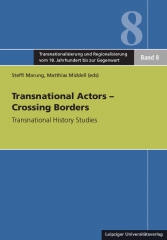 After the dire results that led me to publish an old article of mine as a samizdat, this month brought an unexpected turn of events: After more than 4.5 years, the editors, who had again fallen silent after October 2014, notified me that the book had been published. I had seen no galley proofs, wasn’t asked for my imprimatur or anything: It just came out.

It came out late and is a mixture of the contributions of two different conferences (2010 and 2011), huddled together between two covers and graced by an introduction which shows that two people have written about two different volumes. Basically, the intro simply states that the conferences were successes, bringing together an awful lot of people, and that this in turn shows that transnational/ transcultural/ translocal approaches have gained traction in the Humanities. Well, yes, that’s not bad at all, but somehow does not justify such a long wait (and prolonged silence) in my eyes.

That the copy-editor changed the perfectly correct phrase “Only in the 20th century …” to “Only in the twenties century …” is just a small nuisance, but one that shows that it might have been nice to see galley proofs. Or anything at all since 2011.

Anyway, my article is out now (in the same version as the samizdat I’ve made available here), it is old, it is nothing special, it is hidden somewhere, and …. . What the heck: As with so much “grey literature” in universities, it is out and can simply be forgotten now. Too bad I really worked hard on it in the first place.