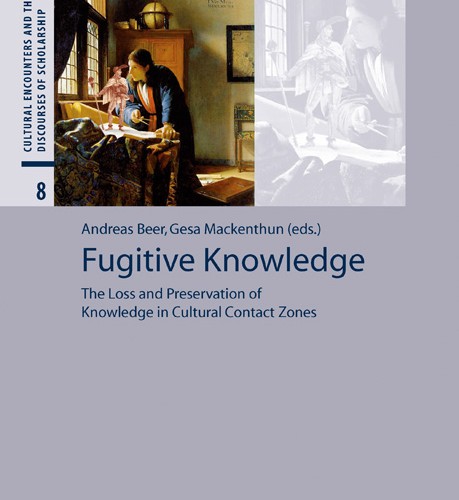 Finally I can announce another publication, one I’m especially proud of because I had the pleasure to edit it, together with Gesa Mackenthun from Rostock University: It is a volume based on a conference hosted in Rostock at the end of 2012, and is called Fugitive Knowledge: The Loss and Preservation of Knowledge in Cultural Contact Zones. It features articles on Latin American-US-relations, early German colonial encounters in the Baltic region (and resistance to it), German colonial policies in its African colonies, new perspectives on the myth of El Dorado and Mayan-Spanish interactions (including a discussion on arguably one of the earliest texts of science fiction originating from the so-called New World), a critical biography of a Danish naturalist who might have re-written the history of species in the Amazonian region if he had not miraculously stopped short in his tracks, a critical review of Tibetan medicine’s contributions to our understanding of “traditional” healing, and much more. The table of content can be found here.

It is great to see it out and about, as its production was plagued with quite some delays. Yet, the diverse geographical and methodological contributions make it worse the wait. This was my first assignment as an editor (and co-author of the introduction, which attempts to bring together the various strands of the articles), and it was an interesting possibility to learn from errors as well as best practices. And it was fun, too.

Let’s see what others say about this attempt to discuss not simply the way in which knowledge is generated during cultural encounters, but also how which kinds of knowledge become forgotten, marginalised or are simply denied its position within new epistemological frames.