Recently, I gave a talk and participated in a discussion on science communication during an online conference. The experience was all good and fun, but one thing really bugged me.

The conference was organised by the Federal Ministry of Education and Research, and they also announced it on their respective webpage (one that’s dedicated to higher education research). This announcement was accompanied by the photo (copyright Luis Alvarez/ E+/ GettyImages) I pinned above this post.

It’s not the first time I encountered stock photography on the page that to me seems surreal. The pictures are clearly depicting generic work or meeting environments with an excessive feel-good-vibe amongst predominantly young people. Apart from the exaggerated emotions and plastic quality of the faces and backdrops, some aspects are highly misleading.

The picture puts a person of colour front and centre, although non-white people are highly underrepresented in the German science community in general as well as in higher education research in particular. Additionally, the whole setting –no laptop computers, no note taking, an overlit office backdrop– misrepresents academic get-togethers. If scientific conferences would actually occur in such settings, I suppose most academics would re-consider their future participation.

I think this is not only a personal aesthetic issue but one that has social repercussions. If a research project on conditions of successful studies is accompanied by this picture 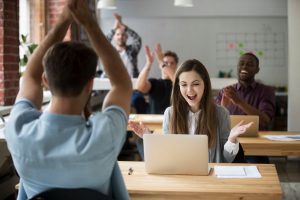 this is not only a nuisance, but also a problem. The business aesthetics that stands in for research, the infantile depiction of young adults or the absence of books, manuscripts or other academic paraphernalia inadequately depicts research and communication between researchers (and/or students).

Some might say that everybody who needs to know does know how academia works and that such imagery is cringeworthingly misleading. Yet, in keeping with my recent focus on science communication, I wonder what about people outside of academia or people (predominantly students at the BA-level) that enter higher education for a rather short period of time and with such images (and others from films and series, mostly) in their heads. Can they adapt?

What does it do to the idea of higher education when in case of doubt (about how to depict something), generic images from start-uppy-technology-saturated business environments are chosen? Does that create a hyperreal universe of academia that begins to influence the real world? Do we have to act like the people pictured because other people have seen these pictures and conflate them with reality? If Beaudrillard was right, then academia should take note that it’s beginning to face some real trouble in the late capitalist simulacrum…

And even if Beaudrillard was wrong, this mismatch and disconnection between the pictured scences and the academic reality is not only less than helpful when protraying what sciences and Humanities are doing, but it is also a disrespect to those scholars who are actually looking at conference announcements, programme pages and the like, and feel those being part of a soap-opera gearing towards teenagers.